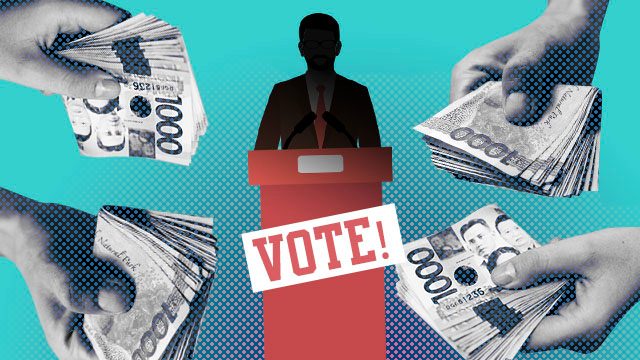 In the US, we should be aware that the results of our elections are heavily influenced by how much money each candidate can raise. Whoever can raise the most money has the best chance of convincing uninformed “Swing” voters or hiring the best advisors who can find out in polls on which issue they get a narrow majority. Politics was about raising money.

Whenever I hear politicians demanding money, I ask myself, what do you need my money for? To buy back the public airwaves from the people we licensed? To pay consultants a higher price for cutting and slicing surveys? I think I’m voting with my vote, not my dollar. What about those without dollars? In my opinion they have less say in this democracy. Hell, if you have enough money, you can fund your own campaign, al. la. Ross Perot. Not quite the same chance.

It is morally wrong for politicians to accept money from people.

I think it’s morally wrong for elected officials to be paid anything that doesn’t match their salary. When an elected official accepts money from someone, every person feels obligated to treat that person differently from someone who has not contributed. It’s common courtesy. However, this contradicts their responsibility to represent all their constituents equally, not based on how much money they have. In fact, as everyone else does, all elected officers must accept the award in order to enter the competition.

I know that the current reality of our electoral system is tangled in a very different constellation, but my “naive, no reality” assumption is that _money_ should not be a factor in our elections, and that this is the responsibility of our government. was made to ensure that this happens. We all agree that elections are the responsibility of our self-government, the only thing that makes our democracy work. But the reality in the US today is that while we all have a “voice,” those with money can use that money to make their “voice” far more valuable than those without. The McCain/Feingold[1] reforms may have made this worse, as the campaign now needs more of those “votes for your money” votes. We need to fix this.

How can we fix it?

I begin by forbidding elected officials or candidates for elected office from accepting gifts or money from any private, corporate, religious, or charitable organization. All election campaigns must be 100% publicly funded. The argument about cost is ridiculous. If we all agree that elections are the primary responsibility of government, then we also agree that that responsibility requires adequate funding.

Second, instead of charging station owners for a license to broadcast on our airwaves, they’re demanding that we give them back the right to do business on that airwaves, don’t even give it to them. The license is with broadcasting election ads tied together. Where appropriate, lower license fees. I agree that our government should bear the financial burden of that burden, whatever that may be. The 2004 presidential and senatorial campaigns cost an estimated $4 billion[2]. Given that we pay about $300 billion[3] a year to service our country’s debt (covered almost entirely by Regan/Bush I/Bush II[4]), I wouldn’t have a problem if the cost of doing so $10 would be -20 billion range/year. Balancing the situation, removing money from the equation as much as possible, must be one of the main tasks of our government.

Third, I will pay these elected officials more. If senators were making $5 million a year, it would be harder to sway them from the $250,000 some lobbyists can give their nephews. If we are to do this, we must bring their salaries up to the level of corporate leaders of the same status. Perhaps we should even tie their salaries to the average company executive salary; it could act as an incentive to ensure the business thrives. But we have to pay them enough so that other people’s money can’t hurt them. Again, paying our elected officials is one of the few things that we all agree our government should be held accountable for, the relatively small amount of money required to properly pay them should not be a factor.

But if you don’t give any money…?

One question I’m not sure about, how do you qualify for your campaign funding? I think it should be open and available to anyone who wants to run it. But it shouldn’t be _too_ easy either. Being a civil servant requires _work_, so _work_ must be one. I just want this _work_ to be something other than fundraising. Being good at getting people to part with their money doesn’t mean they make good elected representatives.

We are currently supporting with monetary donations. If you can’t give the candidate _money_ to show their support, how do we make sure that the people running for the campaign and spending public money on the campaign aren’t doing wasted work and actually have or find support among the electorate be able ? (Even if most of the money we spend on publicly funded campaigns is wasted, we still have better systems than we have today, imo. The machinery of democracy is a better place than most to have money around to throw.)

Perhaps a solution is to provide an option to change the distribution of campaign contributions that come from your own taxes? If you don’t change it, as most people do, your tax contributions allocated to campaigns will be split evenly across all campaigns mercosur digital. If you really care about a campaign, you can use a portion of the taxpayer money you’ve allocated specifically for that campaign.